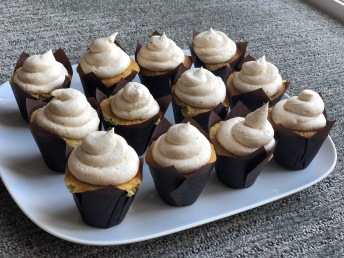 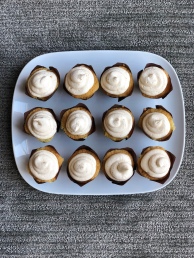 Our only photo together, whoops. 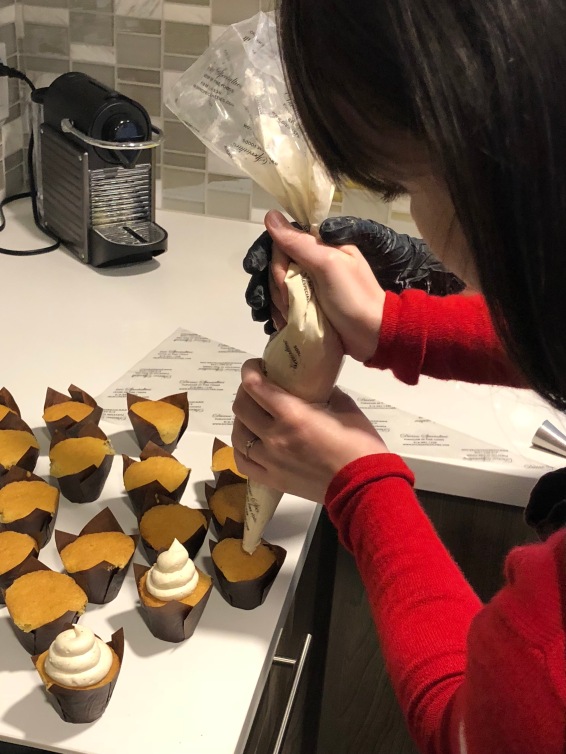 Welcome back to Part 2 with Chef Maeve. Now where were we…

After submitting my entry to the Finlandia sweepstakes, I waited. Sure enough, just before Christmas, I was informed that I had won the “Finlandia, Better, Butter, Bust” contest! A Christmas miracle, indeed. You can imagine my shock. I mean, who ever wins these things? And yet, here I was. Elated. I still get giddy thinking back to when I opened the congratulatory email.

Over the next few weeks, documents were signed, schedules were shared, and then one day, poof, “Chef Maeve coming to apartment at 12 noon” was added to my calendar. Just. Like. That.

“Ummmm, I’m willing to guess your apartment-complex architects were drunk when designing the parking garage.” See what I mean about her humor?

Crap. I invite Chef Maeve to my apartment and she’s lost inside the concrete jungle that it is. I run down the stairs, with her on the phone, and wave her over with my flailing arms and eager-pointing. Seven flights of stairs later, in our mutually-agreed-upon-drunkenly-designed parking garage, she pulls into a spot.

As soon as she stepped into our place, I never wanted her to leave! I must have rattled off over a hundred questions during her 2 hour stay. True in Abby fashion. If you know me, you know I’m not shy about the question-asking. *Insert big teeth emoji, lol.

She felt like an old friend. And I was at ease immediately. Here she was, a celebrity chef in my apartment, and yet, she was so kind and cool that my home, stayed that way, and wasn’t transformed into an unfamiliar place. Because she was so herself, I could be so myself.

Chef Maeve answered my questions while she combined ingredients, interrupting me here and there to explain what she was doing and why. My questions ranged from, absolutely necessary: “What is the secret to a perfect bread pudding?” to perhaps less necessary, “Why do the European countries not refrigerate their eggs?” The answers: “stale croissants in a refrigerated-overnight bath of custard” and “because European countries have less screwed up production laws than we do.” She expanded on the second when I asked my follow up questions, and added another fascinating piece of information:

In addition to the room-temperature dairy in the rest of the world, and the quality of those ingredients, another major difference between American and European pastries is the water. San Diego is notorious for having harsh water and that directly effects baking, especially in gluten-y breads. This is just a teaspoon (pun very much intended) of what I learned during her visit.

I blinked and our vanilla cupcake batter was already scooped into miniature cupcake molds. While our cupcakes baked, our buttercream whipped noisily away in the KitchenAid and she asked, “do you have any citrus we can zest to add to this?” Unfortunately, I was a bit overdue for a trip to the grocery store. I suggested spices instead–thank goodness for the shelf life on those. I brought three different cinnamon varieties over to our buttercream station, as well as nutmeg and pumpkin pie spice. Over-achiever much? I’m a bit of a cinnamon-addict and asked her to explain her preferences and the differences between them. Can I always have a baking expert in my kitchen?

(Note: I’ll share more details in a later post but because this blog is so new, I’m not sure yet if people are as fascinated as I am by things like, cinnamon, so I’ll save you the answers in a designated place).

Another blink and we were piping the spiced buttercream onto our vanilla cupcakes. She demonstrated the best technique for piping, forming perfect swirls on top of each. I took over and created what looked like the poop emoji on top of the cupcake. She made it look so easy! I can assure you it is not as easy as it looks. My last cupcake did look a lot better than my first though, thanks Chef Maeve!

The cupcake was perfect. I had to pinch myself while I ate it. It tasted like a snickerdoodle in the body of a cupcake. While I ate it, I looked over at my kitchen counter, covered with cupcakes. Chef Maeve was my cupcake-fairy-Godmother and sprinkled every kitchen service with perfect little cupcakes. And she did something even cooler. She left me with multiple pounds of cupcake batter and buttercream from our extra large batch. The rest of the week I made pound cakes, muffins (ranging from almond poppy seed, plain, Nutella, chocolate chip, and lemon) and even madeleines with the extra batter. The remaining buttercream was sandwiched between my favorite spicy oatmeal molasses cookies, Oatmeal Cream Whoopie Pies.

And so, while Chef Maeve, Food Network Holiday Baking champion, general badass, and the owner and baker at the successful La Jolla restaurant and bakery, Sugar & Scribe, did have to leave, she certainly did not leave me empty-handed. She left me instead with these words of advice: “Enjoy your life. Work enough to pay the bills but concentrate on what you love and don’t worry about the rest.”